Here are some more circa 2000 commercial images from Japan. There’s not much difference between Eastern and Western cultures in the way they fabricate mythological/ideological messages via semiotic techniques. But there are cultural idiosyncrasies as well, which feed easily into a global mythological context.

Let’s kick start this post with the “Zoomer” 50cc “naked” scooter, which Honda released in 2001. I present this design as a kind of “zero degree,” against which to contrast another Honda scooter of quite a different design. 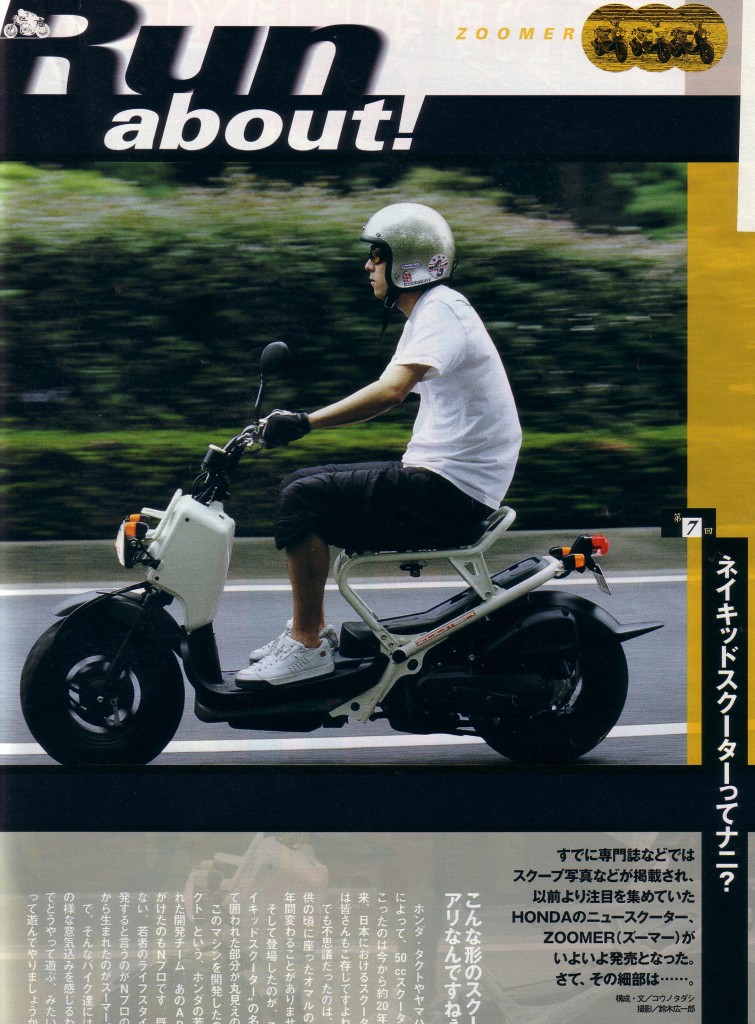 The Zoomer is “naked” in the sense of being stripped down to the bare essentials, with no back cowling. It is Honda’s stated attempt to “appeal to the sensibilities of younger riders favoring a stronger, more distinctive personality and character.”

Thus the modest financial condition of, for instance, the student, is presented as an aesthetic quality. The design reflects a youthful state of being unencumbered, which translates into velocity and airy transparency — a zen-like quality, one might say.

The Zoomer actually uses the same frame as the classic CHF50 Crea Scoopy, but takes on a chopped-down look. There is nothing faintly elitist, pretentious nor rebellious about it. But it differentiates itself stylistically as a generation beyond the Scoopy (which it essentially is).

The rider in this image presents quite a common “attitude” of university-aged Japanese youth. He is flawlessly attired in brand new gear: joggers, below-knee shorts and white t-shirt. An understated sense of style — but a sense nonetheless.

The “brand” of the individual is aloof and intellectual, in compliance with a quite recognizable and sanctioned group or even class of person. The Zoomer is absolutely in keeping with this branding (or identity), and is presented almost as a type of “wearable transport.” It answers a desire to be insulated from, inured to one’s social as well as environmental surroundings, while being connected to them at the same time.

I’m tempted to link this aesthetic to the classic nihonjinron, so-called “thesis of Japanese uniqueness,” even though that “thesis” is somewhat discredited in favor of a more recent privileging of perceived Japanese heterogeneity. In other words, the Zoomer aesthetic seems to me a paradoxical mechanism of “groupism,” a membrane through which one passes to and fro between the collective and individualistic.

Now to move on to a commercial image featuring the 600 cc Honda Silver Wing GT Scooter, with double overhead cam. The vehicle is massively over-styled compared to the Zoomer. It is, of course, a far more expensive and higher-end item, and it needs such styling to bring its conception into a semiological frame. 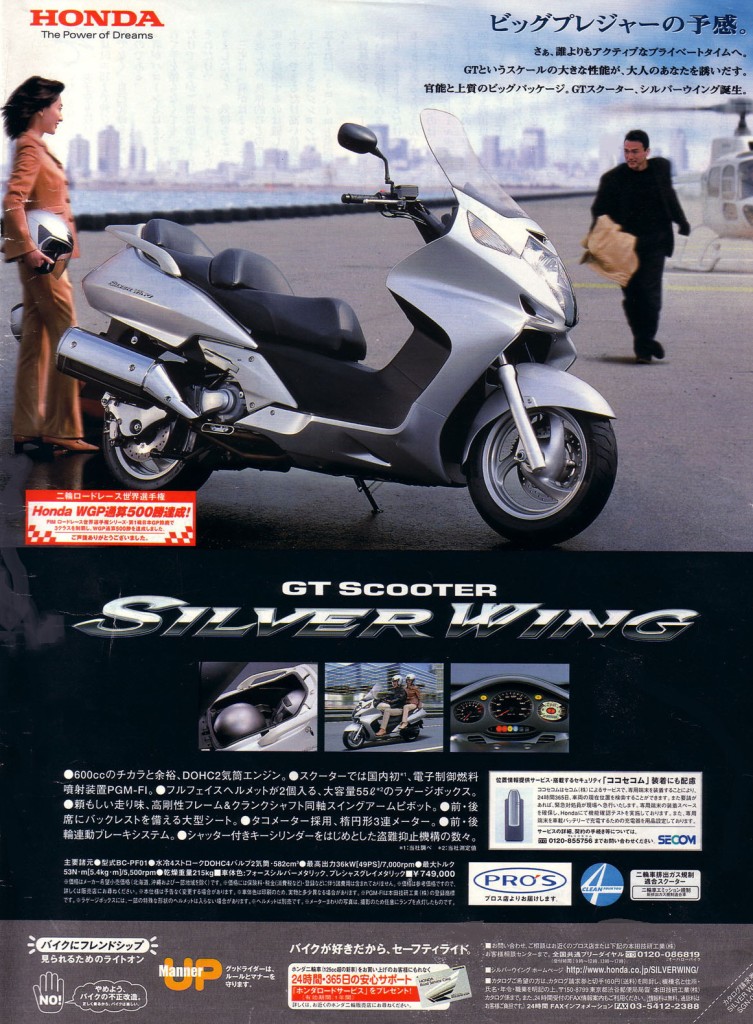 Note first the overt design signifiers connoting aerodynamics, rockets, luxury. The Silver Wing is designed primarily for a couple to use, evidently more advanced in age and finances than the Zoomer rider. Hence the twin seats, both with backrests; more staid, stable, safety conscious. For “adults,” as the text indicates explicitly.

Consider the narrative of the image, which is caught at a critical instant. The male has disembarked from the helicopter and makes his way toward the vehicle, awaited by a female, who is linked thematically to the scooter by the helmets she holds. The two will make their greeting, hop on the Silver Wing GT and power off into the city.

The Japanese text headline is a typical play on words. The set phrase “koi no yokan,” which is close to the English idiom “love at first sight,” becomes “big pleasure no yokan”: the word yokan meaning a kind of premonition of what is to come. This is in keeping with the narrative of the image, of course, which promises pleasure in the experience of the Silver Wing, and in the experience with the female. Not exactly “love” per se, more pleasure.

The hero of the narrative resembles a cross between James Bond and a successful salaryman. He has alighted from the helo, and is on his way to his next adventure. The woman, however, strikes one not so much as a “Bond girl” as a Japanese tour bus or elevator hostess, welcoming the hero into the empty mid-frame space, atop the Silver Wing. She is passive and ancillary compared to the hero.

On the one hand, then, the commercial seems to undertake to represent its perceived target consumer: the quite wealthy “adult” business worker who is looking for a romantic escape with his female partner. Yet, one would not think that it was the wife or girlfriend who went to the trouble of getting the scooter all set up like that in advance of the instant and then stood to one side like an elevator attendant, welcoming him in to the focus.

Therefore, we should assess the possibility that the characters represented are not intended to mirror the ideal viewer of the image, as the text would indicate. Rather, they represent a desired image of the ideal consumer: the desire to be a James Bond. In this respect, the image appeals to a relatively deep adolescent desire — not just a matter of acquiring a Silver Wing GT to complement the helicopter, of course!

The commercial, therefore, appeals to a lack of social power, mobility and sex. Its implicit promise is to provide these things on consumption of the image, on purchase of the commodity. The myth is fabricated from adolescent desires — on the absence of a ride, the absence of a female. That is the semiotic nature of the riders’ space on this image of the Silver Wing.

The myth is not going to compete directly with the Harleys of Easy Rider etc. But who knows, there’s a long road ahead, in which the Japanese urban mythology can only gain on that of the American wilderness, of a passé “looking for America.” It will all be the same in the global-urban.