Wonder Woman (dir. Patty Jenkins) was screened on TV the day after I happened to be reading the first part of Simone de Beauvoir’s The Second Sex, her finely honed analysis of the cultural perception of womanhood. I knew there existed ample literature on the cultural and feminist significance of the Wonder Woman character[1] but hadn’t had a chance to read much of it, and was satisfied enough with the idea that the advent of the WW character was a reaction against the male dominated canon of comic-book super heroes, Superman, Batman (though not “super”), Aquaman, Flash, etc.

I was intrigued to learn that WW was invented by famous psychologist, Harvard professor and feminist Dr William Moulton Marston (pen name Charles Moulton)[2] The original character of WW definitely has feminism in her DNA.

Subsequent waves of feminism have superseded Beauvoir’s ideology, if not exceeded her brilliance, but it seems reasonable to suggest that the inclusion of later than first wave feminist messages would be laden with anachronism. A more Beauvoiresque brand would help maintain a period feel — which is indeed what happens.

So, though the feminism may be dated, I can’t agree with Theresa Harold’s criticisms in the article “Why Wonder Woman isn’t the feminist fantasy we’ve been told it is” (metro.co.uk), citing a twitterer: “Wonder Woman is a thin, white, cisgender able bodied Zionist. No way in hell I’m watching that ish [sic].”[3] I can’t see this as reasonable, enlightening criticism. But I do appreciate the argument against the idea that the cinematic WW should be seen as a model of feminism.

Hollywood-glamorous though Gal Gadot undeniably is in certain aspects, I perceive her as on the tall, strong side and approaching the androgynous in some shots, wouldn’t you agree? At any rate, her physical characteristics are a leap apart from many, perhaps most previous Hollywood “starlets.” When characters in the film comment on her fabulous beauty, the intent seems to be to validate a new cinematic model of female beauty, one based on strength and self-affirmation. This is surely a reasonable, ideologically sound aim, isn’t it? Not that we’re measuring the film in terms of its political correctness.

The accusation about Gadot being a Zionist is irrelevant to me and even worrying — politically weighted, to say the least. There are some other naive points made in the article: “[I]f being semi-naked is the most practical mode in which to save the world, where is Batman’s mankini?” Hmm.

One comment is interesting, however: she lights on the spy Sameer’s line, after WW’s display of power in the barroom fight scene, “I’m both frightened and aroused,” which Harold can’t imagine Lois Lane saying about Superman in a similar situation. Yet it is obviously a comic reference to a sexual mechanism of attraction-revulsion

Functionally, I would argue, the line throws precisely to Beauvoir’s style of reasoning in the first chapter of The Second Sex, where she examines the gamut of biological reproduction across living species, in the context of ascertaining and rejecting received notions about the essential nature of the female:

Alfred Fouillé claimed he could define woman entirely from the ovum and man from the sperm; many so-called deep theories are based on this game of dubious analogies … it was imagined that the ovum is a female homunculus and the woman a giant ovum.

Existence precedes essence. The female is not conceived or born as such, as traditionally defined — rather, she becomes herself.

The sperm, as well, has been conceived (and still is, perhaps, by some “foggy minds” — Beauvoir’s term) as a microscopic male homunculus. It has even been “scientifically” observed and recorded as such, as Beauvoir points out. Hence, one symbol of human male anxiety about the female lies in the mechanism of fertilization, in which, “[by] giving up its transcendence and mobility, the sperm penetrates the female element: it is grabbed and castrated by the inert mass that absorbs it after cutting off its tail …” 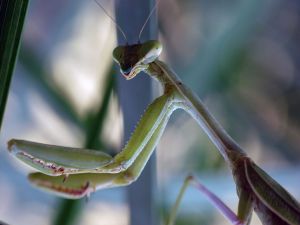 The origin may well be in Beauvoir, who refers several times to a most fascinating insect of the order Mantodea, as one of several threatening images evoked by the word “female”: “the praying mantis […], gorged on love, crushing their partners and gobbling them up …”

Some of WW’s characteristics link transparently to the praying mantis:

When WW strides into “no man’s land” she asserts herself as the ovum-presence. Bullets fly as she strikes her Amazonian war-poses, and fends them away like so many spermatozoa.

Then there is the romantic scene with her and Trevor — her lover, who will sacrifice himself for the sake of her self-realization — dancing in the snow. The spermatozoa have turned into snowflakes, framing her delicately and romantically in all her gorgeousness. Idealized ovum.

A semiosis is at play, a pleasurable, open-ended action of play. The film’s feminist achievement is that it does not attempt to impose a totalizing moral — what some of its critics howl for — but which, if articulated, would destroy itself in its own ludicrousness. Far better to inform the mise en scène with a historical impression of feminism, a semiotic reflection on feminist ideas. Undoubtedly, the Hollywood ideology will tend to subsume any contrary, totalizing moral, one way or another.