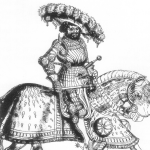 A bilingual German-Australian, who spent many years exploring in and around every German castle ruin he could find, and many more non-ruined castles and palaces than you could poke a selfie stick at. Although I lived and studied in Berlin and Northern Germany for many years, I also visited Bavaria, the Rhine and Swabia, the scene of our series, even understanding a bit more than a mere muggelseggele of Swabian, a somewhat bawdy term I prefer not to translate because children may be reading this.

After enduring years of having to read classic German literature, from the poems of Walther von der Vogelweide to works such as Simplicissimus and on to those of Goethe, Schiller, Berthold Brecht and Guenther Grass, I could, without any doubt, be described as an avid German Kulturbanause. Just the kind of person who would have got on well with Sylvanus Cobb.