A bit of a coincidence, more names. And Cobb even explains their origins in detail. How do we respond to and interpret them? Now we hear of Irene and Wolfgang. In English, we pronounce Irene as in “serene”, with an emphasis on the second syllable. In German, it […]

Strange, that Electra’s beloved should say of Thorbrand that he may be “evil” but not “dreadful“, and that he would “never take a penny from a man he knew to be poor”. A German Robin Hood? Some say that the before-mentioned Eppelein von Gailingen was one; however, there […] 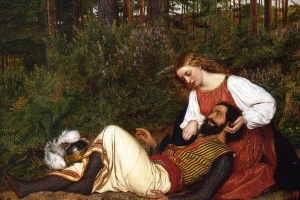 Arme Ritter (“Poor Knights”) is a fourteenth century recipe for pan fried French toast served with sweets which is still very popular in Germany today. Watch this video to see how you can fry your own Sir Lancelot. We don’t know for sure how the name Arme Ritter […]