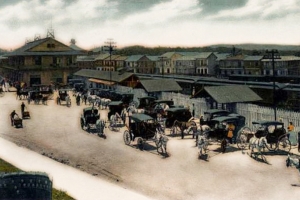 As we begin this chapter, Fernando Gomez Montez, having tampered with George Ripley’s revolver, has new confidence, and commences putting in place other components in his plan to relieve the American of his gold-filled chest, and fair-skinned wife. Montez arranges boat transport for himself and the Ripleys to […]

A brief reflection on the theme of eugenics that Brian Armour identifies in Baron Montez, in his preface to Chapter One. Gunter was himself probably of “mixed race” to a modest degree. Legacies of British Slave-ownership, a web site of University College London, reports that his father, Henry […]

Our narrator is at it again, delighting us with wonderful descriptions of island scenery and life, while never missing an opportunity to take a swipe at Montez. Fernando is now increasingly referred to as ‘little’. When a Narrator becomes a character in a story, as I explored in […]

Welcome to the first instalment of Achibald Clavering Gunter’s 1893 novel Baron Montez of Panama and Paris. The story is integrated with historical events which provide a background for the introduction of the main character, Fernando Gomez Montez. The first chapters take place on a particular day, the […]

Prepare to embark on an idiosyncratic taste thrill, another foray into the paradoxically expanding universe of vanishing literature. This bestselling author-playwright, said to have been better known in his day than his contemporary, Mark Twain (1835-1910), is now reduced to fragments, trivial contributions to popular culture: Played middle-man […]